Masuoka (Shinya Tsukamoto) records everything. He doesn't have a steady income and makes his living as a freelance cameraman. He shoots footage and presumably sells it. One day with his video camera, Masuoka is in the subway and captures a man about to commit suicide while the police attempt to talk him out of it. After reviewing his footage at his work desk, Masuoka is convinced that the man killed himself because he was terrified, and what terrified the man was down in the subway in its tunnels and catacombs. Armed with his video camera, Masuoka heads deep down under Tokyo to discover what terrified the man in Marebito (A Stranger from Afar) (2004). 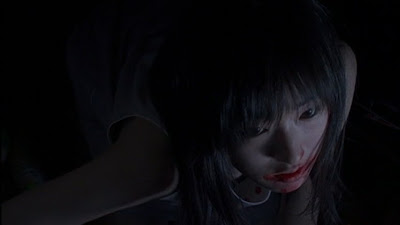 The director, Takashi Shimizu, is talented. Interestingly (and perhaps ironically) upon its first viewing, the narrative of Marebito is compelling (screenplay by Chiaki Konaka from his novel), and it is easy to surrender to the story and watch it unfold. During a second viewing, it is easier to become detached and watch how the film is constructed. Masuoka doesn't just capture footage with his video camera but he reviews it at the end of the day. At his work deck with multiple monitors and equipment, Masuoka is able to slow, freeze, and replay the events. If Masuoka walked the streets of Tokyo every day and captured the events with only his eyes, then all his critical review would have to come from memory. With his video footage, Masuoka can apply a much more critical eye. During the suicide subway footage, Masuoka is able to capture one frame of a split second, a quick glance by the man down the hallway of the subway. Viewing this one frame during this split second, Masuoka becomes obsessed with what terrified the man and he wants to replicate the experience. Marebito is about the perception and construction of reality. What the eye sees, what the mind perceives and what video captures creates the film. 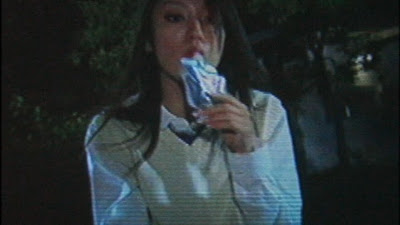 Most of the scenes away from directly advancing the narrative seem innocuous. In one telling sequence, Masuoka is walking the streets and holding his camera near his waist. The footage that he is capturing is fuzzier than the primary film footage which Shimizu is using as stock for Marebito. In Shimizu's footage, the faces of street people are blurred, but there is no blurring in Masuoka's footage. A man in a suit walks past Masuoka, and as he turns into a tunnel, Masuoka is confronted by the passing man. Were you recording? he asks. Masuoka lies and says no. The man presses him again and demands the tape in Masuoka's camera. Did you do something bad? asks Masuoka. The man doesn't answer that question, and Shimizu offers no evidence whatsoever for the viewer to speculate upon the question. The blurring/no-blurring footage from Masuoka/Shimizu juxtaposed with Masuoka's encounter with the man (Masuoka gets beaten for his cassette) leads to no discernable, rational answer. Maybe, however, that some people just do not like being captured on camera. 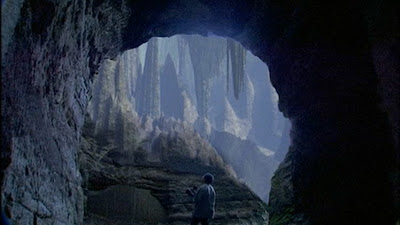 One of the oddest quirks that Masuoka has is filming his apartment while he is gone. During the course of Marebito, he finds a dweller in the underground and houses her there. Footage is shown of Masuoka purchasing a surveillance camera, designed, as the salesperson describes, to monitor your pets, like a cat, when the homeowner is absent. Masuoka is able to monitor his houseguest from his cellular phone via remote from the camera. However, Shimizu shows his viewer the point of view from the remote camera in Masuoka's apartment before he discovers the dweller in the underground. Why would Masuoka want to film his apartment then, seemingly unoccupied? Perhaps the answer is in the question, as "seemingly unoccupied" is the phrase which hides Masuoka's fear. At the end of a day at his work desk, Masuoka reviews his house footage from the remote camera. He watches his house guest move around and notices in the footage that she is alerted by something/one. The footage blacks out and for twelve seconds, Masuoka has no idea what happened. His house guest is traumatized, and presumably, what caused her distress occurred during the twelve-second blackout. Masuoka is distressed, but the flaw in his plan to capture the world around him is revealed (or the world that he wants to capture/perceive): he cannot completely create his own reality, regardless of his methods. 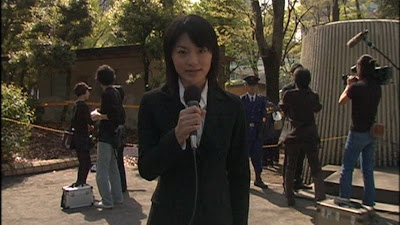 Marebito has more layers. Quite a few jokes are made at the media's expense, and Masuoka also has a mental condition, which may or may not be clouding his perception of reality. In any case, Shimizu's sensitive portrait certainly deserves sensitive viewing. Few films like Marebito are so meta yet so organic that for this reason alone, Marebito is worth viewing. With films like the original V-cinema Ju-on, Reincarnation, and this one show that Shimizu's cinema is often top-shelf and extremely provocative.
Posted by Hans A. at 11:41 PM

I saw this one earlier in the year for the first time but don't remember much about it, which isn't a good sign. I had watched A SNAKE OF JUNE right before it, so it was a cool coincidence to see its director as a star in this movie. Maybe I should re-watch it some time soon. Anyway, looking forward to your next review Hans (hint hint), hope all is well.

@Alex--hope you check it out.

@Aaron--sorry that it took me a while to publish your comment. I've been on vacation and hope to get back to writing soon. Hope everything's good.

No worries man, hope you're enjoying/enjoyed your vacation!

Nice horror film! Going to check this out..