This post is part of the Italian Horror Blog-a-thon, hosted by Kevin Olson at his excellent film blog, Hugo Stiglitz Makes Movies. Click the image on the right to learn more about it and click here to see some of the other excellent blogger submissions.
At the Vatican among the crowd in audience for a Papal Address on the true existence of the Devil, the camera harshly cuts to a young man bound to a bed, heckling the Pope's speech. With another harsh cut, a voluptuous nude woman lays atop an altar, adorned in black cloth, with a bunch a folks around her in black cloaks. The woman atop the altar is going to be "the host" for the Devil "who will bring about the apocalypse." The priest presiding over the black mass says some mumbo jumbo so the other participants can begin what they showed up for: an orgy. With a final harsh cut, a young nun is seen entering a nice home, where doctors are attending to a wounded person. Elena (Patriza Gori), the young nun, asks "What happened?" Your brother, Peter (Jean-Claude Verne), bound to the bed upstairs, attacked the poor person. Elena looks upon Peter in his room. Peter's wickedly possessed and spews "Untie Me!" when Elena enters. So begins Angelo Pannaccio's Cries and Shadows (1975). 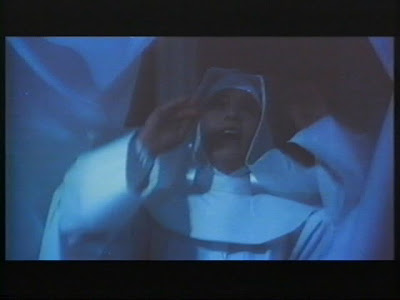 In the wake of the cinematic ka-ching of William Friedkin's The Exorcist (1973), there were other film makers eager to reap some of its profits, primarily from Italy. Friedkin's well-received film worked on many levels: it is an engrossing character-driven drama, highlighted by intellectual themes such as the spiritual versus the secular and religion versus science; and The Exorcist had enough scares and provocative, transgressive sequences to satisfy the most rabid horror fan. The majority of the Italian films that I've seen made in its wake take two approaches: the more serious ones, which emphasize the intellectual themes from The Exorcist, such as Alberto de Martino's The Antichrist (1974) and Ovidio G. Assontis's Beyond the Door (1974; an Italian/American co-production), and the ones which emphasize the scares and the provocative scenes (read sleaze), such as Andrea Bianchi's Malabimba (1979) and Mario Bianchi's Satan's Baby Doll (1982). (I would be remiss if I didn't mention one of my favorites, from Germany, Walter Boos's The Devil's Female (1974), shot in the style of his myriad Schoolgirl Report films but with a ridiculous litany of Satanic hijinx.) Angelo Pannaccio's Cries and Shadows is more akin to the original Exorcist and strikes a balance of drama and scares and sleaze. 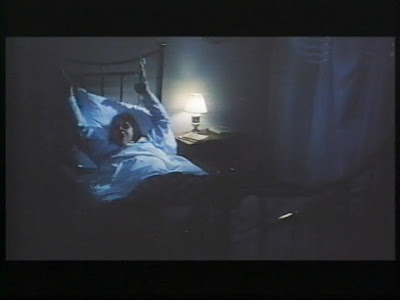 After Elena hears the physician's diagnosis, "hysteria," and recommended treatment, "mental institution," she refuses to commit Peter. Elena goes to church the next morning and enters the confessional and begins to tell Peter's tale. Cries and Shadows cuts to flashbacks. Peter's problems began when he and some friends visited a local river, and as Peter was snapping shots with his camera, he spied a nude woman beckoning him from across the way. The woman was the same one atop the black-cloaked altar, and she didn't appear in any of the developed photos. Peter returns to the river scene where the woman was standing and finds a medallion in the river, depicting an upside-down cross and an unknown inscription. Since finding it, freaky stuff has been happening: he follows a mysterious woman to accompanying wails through the alleyways of his town and shoots a bottle of champagne in his girlfriend's face at her birthday party. Peter feels the pangs of pain in his chest and throws the medallion to the floor in his bedroom. Where the medallion falls, the woman appears to Peter, with her legs open, and she beckons "You've been looking for me, haven't you? Come into me." Peter jumps the lady and slits her throat with a nearby knife. Peter didn't kill anybody in his bedroom, but his girlfriend dies from a slit throat, while dancing on the disco floor. 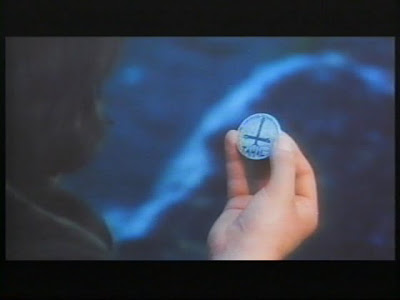 Cries and Shadows truly benefits from its authentic location, an Italian town, high up on the side of a mountain. Peter's chase of the woman and the wails through the alleyway are haunting, as are the images of the church, which seems to loom over the town and hillside, as Elena ascends the stairs for confession. The film makers obviously knew the power of their location, so they integrated it into the possession plot line, which is what sets Cries and Shadows apart from the other Exorcist "inspired" films. Whereas little Regan was vulnerable from her emotional state (her career-driven mother and her neglecting father) and playing with Captain Howdy on the ouija board, Peter's hometown is the source for the evil. Revealed later in Cries and Shadows, in 1723, a heretic priest made the beast with two backs with a local woman who had given herself to the Devil as his "host." The black mass and orgy sequences (which litter the film in quite a few flashbacks) come from this ancient incident. The Inquisition rolls into to town to stop the evil but obviously fails. Also, in the other possession flicks, including The Exorcist, the possession victim becomes the host for the demonic spirit. However, in Cries and Shadows, Peter is just a conduit. The evil seems present anywhere Peter's been, primarily his bedroom. The devilish woman driving the action is often seen as the attacker, and often butt naked, as when she attacks poor Elena or Peter's mother (who doesn't survive the attack). 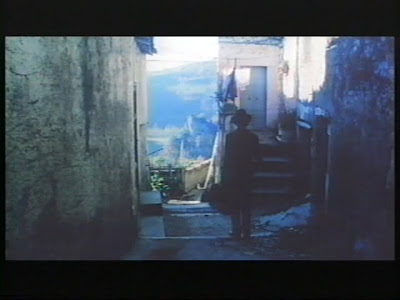 As the area is tied to the evil, the savior must come to the town to save it. The exorcist arrives for his ritual on Peter as the actor Richard Conte in his final film role. Conte is a wonderful, old school Italian-American actor after his role as Don Emilio Barzini in Francis Ford Coppola's The Godfather (1972) went abroad and lent his talent to many an excellent Italian crime flick, such as Tonino Ricci's The Big Family (1973), Duccio Tessari's Tony Arzenta (1973), and Fernando di Leo's The Boss (1973), for example. Often Conte dubbed himself in English, and his New York accent and his mannerisms often gave the cinema a real credibility. As he disembarks a boat to enter the little Italian town, dressed exactly like Max Von Sydow in the original (also to a tune which sounds a lot like James Taylor's "Fire and Rain," but I digress), his voice-over narration begins, and it's hostile speech. Satan has put a challenge before this exorcist in a battle of good versus evil. It's a good thing that Conte didn't do his own English dubbing here, because I immediately would have thought that Conte was coming to pop a cap in Peter's possessed ass. Conte's role is limited to the final fifteen (or so) minutes of Cries and Shadows in an unfortunately perfunctory exorcism scene. 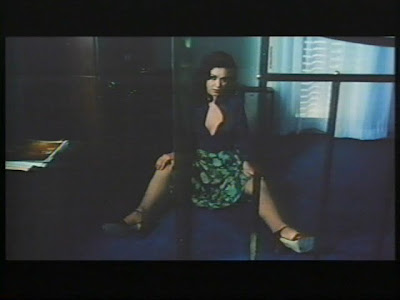 The acting, save Conte, ain't that great but each tries his/her best. The scares are mostly effective with excellent use of the location. Pannaccio doesn't use music in most of the woman's attack scenes, so each is quietly creepy, as if an attacker is sneaking into your bedroom. Peter's initial scene, with the tossed medallion is freaky: to see her appear on the floor is well-executed. When Cries and Shadows is bad, I laughed. The champagne to Peter's girlfriend's face shouldn't have made me laugh, but it did (quite a bit). The actual exorcism or expected possession-type scenes aren't really there: Cries and Shadows is more like Jean Brismee's superior The Devil's Nightmare (1971), where a demonic figure gets devilish and frisky when necessary. The orgy scenes are appropriately sleazy, accompanied by organ music. Overall, Cries and Shadows is obscure Italian horror done cheap and will satisfy the rabid fan of Italian genre cinema for ninety minutes.
The Exorcist subgenre is a true blessing, and one of my favorites. Cries and Shadows ain't the greatest, but the genre has spewed out a lot worse.
Posted by Hans A. at 2:51 AM

I was unfamiliar with this Italian horror title. What a great review!

Thank you Will for the kind words. I appreciate your visiting, reading, and commenting.